Reunion at the Yellow Sea

It has nearly been a month since our three Whimbrels departed Broome. Their journeys so far clearly show us that, when it comes to migration, individual bird of the same species has different strategy but yet could still show some similarities. 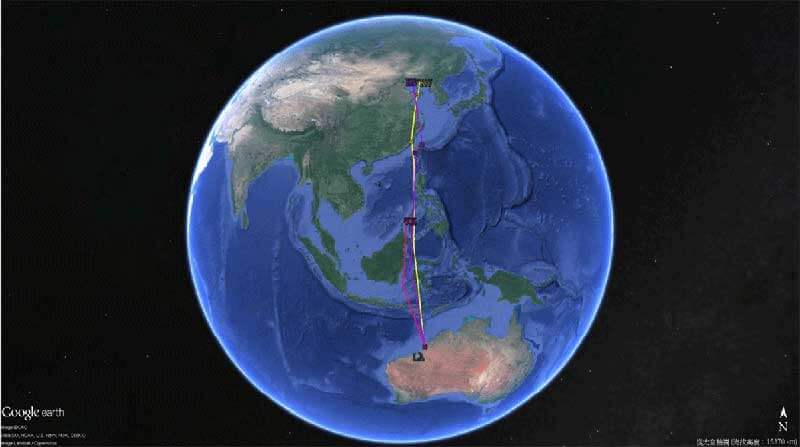 We caught our Whimbrels KS and KU in the same flock, fitted them with satellite transmitters and released them together on the same day (24 February 2017) at West Quarry Beach, Roebuck Bay, Broome. Back then, they were at a similar stage of wing moult (outer most primary feathers nearly finished) and at a similar weight (KS – 357g; KU – 399g). Therefore, it seems very reasonable for them to start migration on almost the same date (16 & 17 April).

Six days later, both KS and KU reached their first stop-over sites on migration, which are 280km apart (Figure 1.). Both sites are estuarine areas with inter-tidal mudflats for foraging. Since then, their journeys have deviated.

KS adopted a ‘hopping’ strategy, staying at different sites over very short period of time, so it was really lucky for it to be found and photographed. Overall, KS stayed in Taiwan for only 6 days before moving onto its next leg of migration.

On the 30th April, KS departed Taiwan and flew 1747km to the Yellow Sea (Figure 2.). After a brief stop for a day on May 4th in the south-west corner of Liaoning Province, China, it then continued to fly another 143km east to Panjin; an important wetland area in the northern Yellow Sea for migratory shorebirds, breeding Saunder’s Gull and Red-crowned Crane.

KU used a different strategy, staying longer to refuel in Xinghua Bay, Fujian Province, China (Figure 3.). KU stayed at this location for 11 days and departed for the Yellow Sea on May 4th. On the way, it  made a short stop at an artificial lake and natural estuary in Shandong Province on May 6th  before flying another 446km north to Liaoning Province.

It is an interesting ‘coincidence’ for KS and KU to reunite in the Yellow Sea area. They are now less than 50km apart after 20 days of migration and are using similar rice paddy field habitats (Figure 4.).

Rice has been a popular local product of the Panjin area since the 1980’s due to its highly fertile soil and suitable temperature. May is the time when rice farmers transplant rice seedlings to the paddy field, creating perfect wetland habitats for shorebirds!

Both KS and KU have been in Panjin for over a week. They will most likely stay until late May before departing for the Arctic. Let’s see which one will reach their breeding grounds first!

Meanwhile, JX has stayed in Malanut Bay, Palawan in the Philippines for 20 days (Figure 5.). A closer look at the satellite image shows JX is using a shallow reef area. On the evening on May 10th, JX flew north-east for 10km, which appeared as though it was starting to migrate. However, it returned to its previous location after 2 hours. It will be interesting to see if JX will migrate to breeding grounds in a month’s time.

Life for LA seems to be much more relaxing at Eighty Mile Beach.

In May, its movement has been confined to a 10km2 area along the beach, with the occasional flight over the sand dunes to the inland marshes. We do hope the satellite transmitter on LA will last for another year to track its migration in the next season.