This document shows the movements of 22 Far Eastern Curlew tagged during the non-breeding seasons of 2018 and 2019 at four sites across Australia: Darwin Harbour (NT), Broome (WA), Moreton Bay (QLD), and Western Port (VIC).

The map below shows the flyway-scale movements of all curlew beginning on 2019-01-01. Please note that all maps show raw location data which have undergone no or minimal filtering for accuracy.

All three Curlews, AMANDA, DAMIEN and GAVIN, have followed similar flight paths north to China and the southern islands of Japan.

Like our Northern Territory Curlews, all of the Far Eastern Curlews tagged in Broome have followed similar flight paths and are now located in different parts of the Yellow Sea, with the exception of Milly, which is in Taiwan.

Two of our Curlews tagged in Queensland are currently the furthest north on migration of all 22 birds. 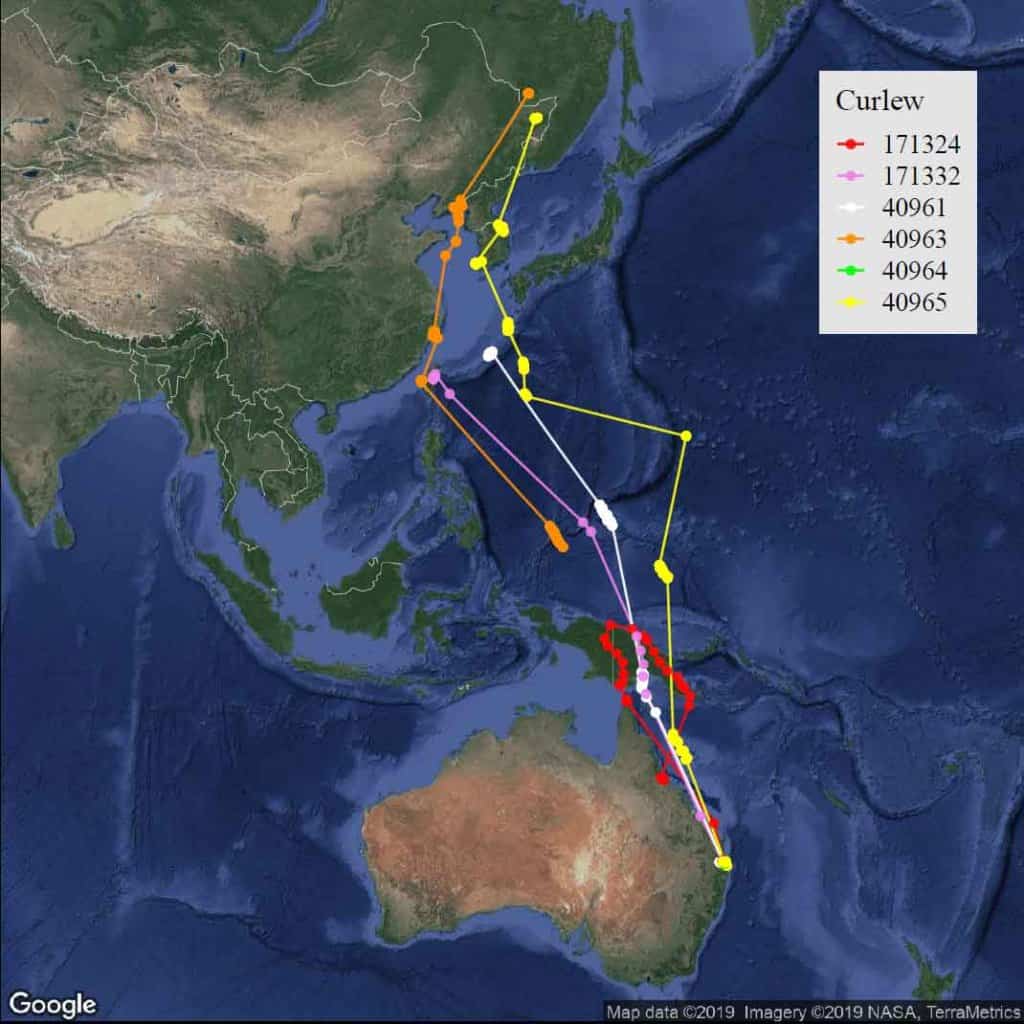 After a two-week stopover on the coast of North Korea, just east of the Yalu River, 40963 now appears to have arrived at its breeding area in southeastern Russia, the same area it occupied during the 2018 breeding season.

Curlew 40965 is being tracked for the second consecutive year after completing a round trip journey to its breeding grounds and back in 2018.

As in 2018, 40965 spent the non-breeding season in Australia moving between Geoff Skinner Wetlands on the Brisbane side of Moreton Bay and Dunwich on North Stradbroke Island, with periodic visits to Peel and Goat Islands in between. The bird departed Moreton Bay on 11th March, 2019 before being re-detected ~300 km offshore to the east of Cairns on the 14 March, 2019. The bird made landfall on Amami, Japan on 21st March, 2019.

After departing Amami, 40965 made two more stops on the southwestern and north- eastern coasts of South Korea and now appears to have reached its breeding area in northeastern China, the same area it occupied during the 2018 breeding season.

40964 stayed in Moreton Bay for all of 2018, forgoing migration to the breeding grounds.

It is currently remaining in Moreton Bay, moving between Wellington Pt, the western coast of North Stradbroke Island and MacLeay Island.

40961 is currently stopping over on the southern coast of Okinawa, Japan.

After departing Moreton Bay, 171324 encountered strong headwinds from Cyclone Trevor as it headed north and was temporarily grounded on Cape York. After the cyclone passed it resumed northward migration, reaching the north coast of Papua New Guinea, but then circled around and returned to Queensland. The bird was last detected in Townsville.

After departing Moreton Bay, flying over Papua New Guinea, and crossing the Pacific, 171332 made landfall in eastern Taiwan.

The bird was tracked to Okinawa, Japan where it stopped over for several days before its tracking device unfortunately fell off. The bird was later spotted alive and well at Manly Wader Roost in October 2018 by Arthur Keates. 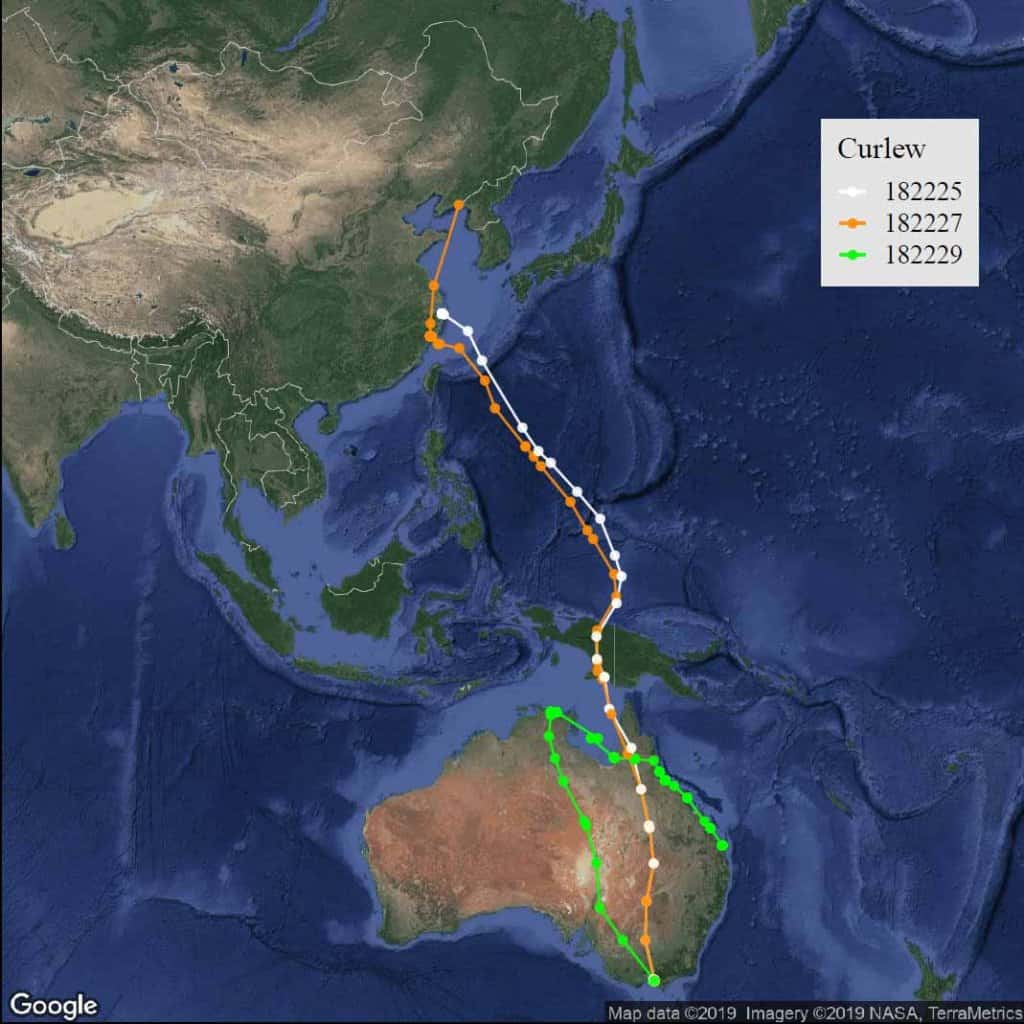 Two of the Curlew from Victoria – KOO and WEE – are still positioned on the Yellow Sea in China. 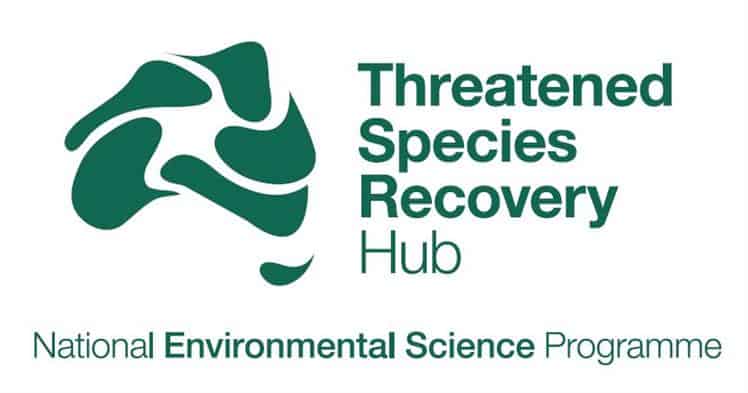 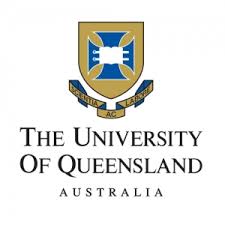 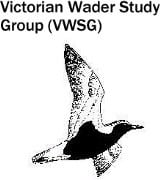 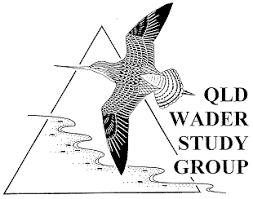 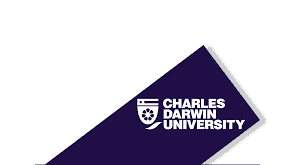 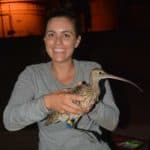