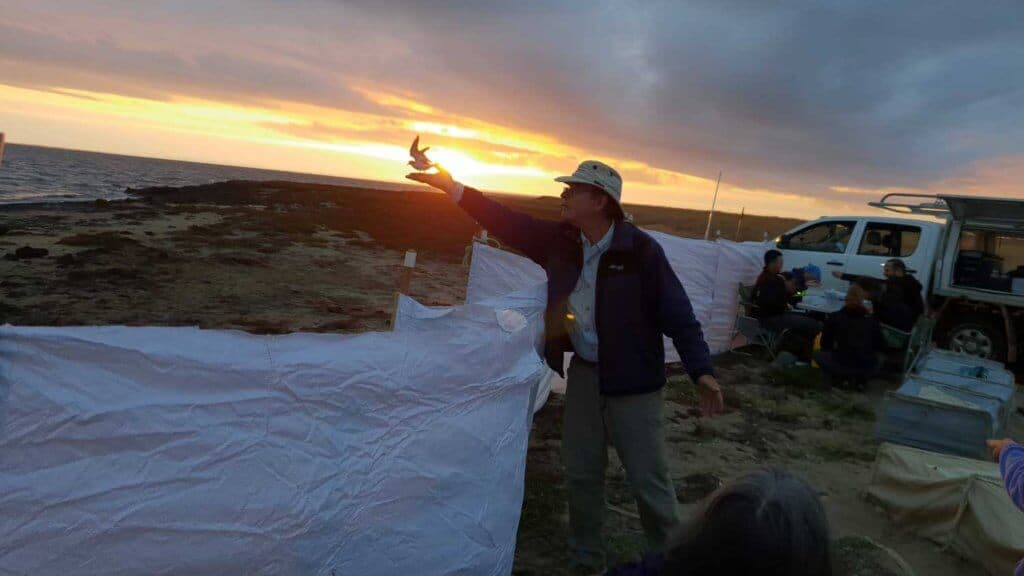 On Moomba we all made our way
To Costello’s for fun on the Bay
Roger cajoled us and Robert enrolled us
And we rolled ‘cross the paddocks – Hooray!

The reecies had all gone just fine,
‘Set the nets here’, Clive divined
As newbies constructed, Rog and Ila instructed,
“Be sure that the cannons don’t shine!”

Clinton, he picked up some dirt
“Black cotton mud” to assert
Bretan, he say, “Anaerobic, org clay”
As we squashed with our fingers, spurt, spurt

At last we completed that task,
Then all sat around in the grass
Heidi shared apples and Meredith cackled
As we waited for tide and the cast

Marcel soon arrived with his team,
Dapper Deakiners scrubbed up and clean
Focused and driven, with laptops unriven
They outshined us grubbers between

Excitement began then to mount
As waders began Clive to taunt
Through his handset he spoke, “There lots out there folks,
But the buggers don’t want to get caught.”

“Don’t step on the net” Ila cried
As we went to extract birds alive
Ten pipers per bag, Kristen started to sag
Seeking cages for all to abide

We all caught our breath for a minute
But soon hurled ourselves back into it
Stint at stints for a start, then a flag and a ..oops
As we raced to complete before dark

The geos most all got located
As moults, weights and age were dictated
Some poop it got gathered and much blood got spattered
As sunset and sky spectacted

Finally there was a debrief
Much to Olivia’s relief
As we all departed Clive’s car didn’t started
….but the Deakin folks saved him from grief

An addendum by Rog Standen

Several people have appreciated getting some more information on how the catch process works and with Andrew Browne’s great photos it enables us to explain some of the decision making.

Here is a sequence of images that explain what happened with this latest catch at Yallock Creek – somewhat bland against Pat’s terrific poetic report above.

Figure 1. above shows the two nets that were set 4-5m above the previous day’s high tide mark – very close to the anticipated high tide on catch day. This was intended to still give us 2-3m packed with birds on the beach above the water to catch if we couldn’t catch before high tide and allow us our 2m of safety where we had no birds in danger.

We had a clear view down the line of the safety area between the nets and the Salicornia (salt bush) scattered through the catching area. The birds use this vegetation as shelter from the wind.

Notable things around the area are the flock of Silver Gulls adjoining the waders and catching area and a line of Masked Lapwing further out on the peat ‘cliff’ beyond. The latter made us nervous as often when they take off they call loudly and disturb flocks of waders.

As shown in Figure 2. above, a flock of birds accumulated nicely as the tide came in, but the Curlew Sandpipers remained down near the water. We waited patiently for them to run up to join the several hundred Red-necked Stint in the catching area.

I could hear this voice in my mind saying “we would love to have those stints Rog”. At this stage we could not fire as there several birds in danger. We had a jiggler line set in front of the nets to move the birds out of danger if needed – but something else did that for us.

“Birds are up! We’ve lost them all!” cried Clive.

We had no idea what put them up, but we were concerned that the wind, that at this stage was gusting to 35km/hr, was making this site too exposed (Figure 3.).

All the birds went west and we relied on Graham B to bring them back. We still had an hour or so before high tide so were not worried from that point, but were concerned about the wind. Fortunately it abated (we were kept updated by Meryl watching the wind reports from Frankston) and dropped by 5-8 km/hr.

That made us more relieved about firing the small mesh net into such a strong breeze. The difficulty with firing into a strong breeze is that the net gets held up in the air and birds have more time to escape from under the front of it. Effectively it means the catch area is reduced by a metre or two at the front end.

We were faced with a bleak scene (Figure 4.) while we waited and hoped that Graham could send us birds back, which he did magnificently.

Unfortunately, several groups of the returning birds flew right past us heading east to Stockyard Point or thereabouts and many of the Curlew Sands may have been with them.

Ultimately we had a good number of stint in the catching area (above) with the gulls settled some distance beyond, but they were still a concern in case they took off and took our waders with them again.

We were still waiting for the remaining Curlew Sandpipers to slowly make their way up to the cathching area. We had no birds in danger, but the gulls lifted. The waders stayed put and Clive didn’t want to take any further risk.

The firing box was already armed and the far net was switched in, so as the gulls went up he made the snap decision to call ‘Three, two, one, fire!’

Off went the net, throwing seaweed and sand everywhere! 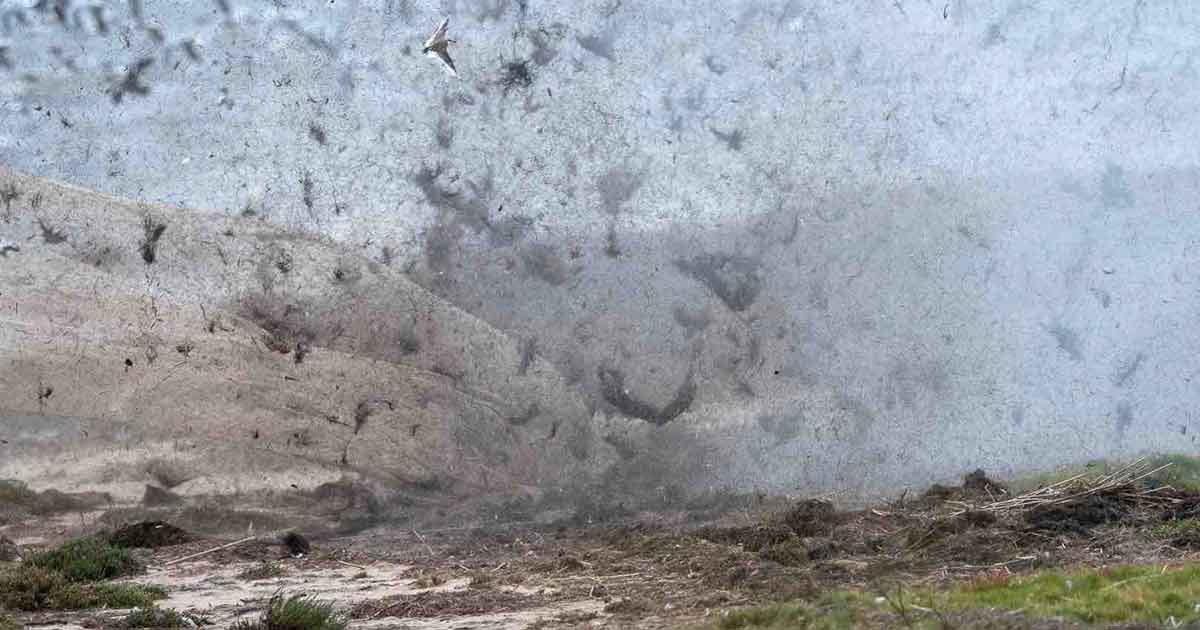 This example shows how important the siting of the net is. We often take quite a while to select the site but it is the critical piece of the jigsaw that is making a catch. The information coming from recent recces (thanks to Rob and Clive) is very important in this along with accumulated knowledge from years of catching at the site.

Camouflage in this case was incidental compared to where we set the nets, with the more obvious net being the one to make the catch, but all things being equal, a better camouflaged net is what we strive for.

The 28 strong team was at the net rapidly (birds were not in the water) and we tented the net to accumulate birds higher up the beach beyond the incoming tide (Figure 5.). We then covered all the birds with covering material (shadecloth) and proceeded to empty the net into keeping cages.

With such a good team of experienced members and newcomers, we managed to get all the birds processsed before we lost all the daylight (Figure 6.). We deployed 60 geolocators on Red-necked Stints and 8 of the 16 geolocators we had for Curlew Sandpipers (we caught 14 but 6 were juveniles so couldn’t deploy geos on them as they do not migrate in their first year) (Figure 7.).

*catches after february are not used for calculating juvenile percentages as adults can have started migration.
# as we had so few catches and numbers of stint over this summer this catch was valuable in giving a solid picture of their last year’s breeding. The average over the past 40 years is 15.1% so they had a less than average year last year.

This was an excellent finish to our Victorian summer program. Thanks to everyone involved in the team and to Damian Costello for allowing our access and use of his farm. 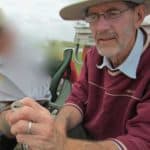 Roger Standen
Author
Roger Standen is the current Chair of the Victorian Wader Studies Group and has been banding shorebirds since 1995.

Written by Pat McWhirter and Roger Standen for the VWSG. Edited and published with permission by Amellia Formby for Wing Threads © 2019.