A summary of the Northward journey

Now that two of our Whimbrels are busy breeding, it is a good time for us to look back at the magnificent journeys that they have made. 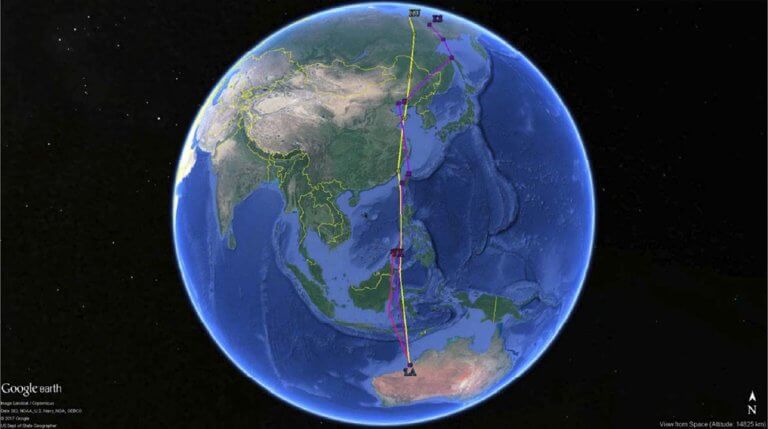 In February and March 2017, satellite transmitters were fitted on Whimbrels at 2 sites in north-west Australia; Eighty Mile Beach and Roebuck Bay, Broome. Whimbrel LA is a 2nd-year bird (born in 2015 Arctic breeding season) and was the first to receive the transmitter. One of the questions we were interested to know when we decided to deploy a transmitter on a 2nd-year Whimbrel was whether it would migrate north, or stay in Australia for the breeding season.

LA not only gave us the answer that it has decided to stay, it has also shown us that Eighty Mile Beach is an ideal destination for foraging waders as it doesn’t need to move around much. Over the past 5 months, LA’s movement has been limited to less than 20km along the shoreline, with most time spent at 43-52km south of the beach entrance from Anna Plains Station.

The next two Whimbrels were caught in the same cannon net catch at Roebuck Bay on February 24th, 2017. Both were adult birds (>2 years old) and as such, expected to migrate to the breeding grounds, which they successfully did!

Along the way, both KS and KU chose paddy fields in Panjin, Liaoning Province as their ‘longest stay’ stopover sites, landing just 50km apart from each other during their stay in May (Photo 2.).

The most remarkable story during the northward migration of these two Whimbrels must be the discovery of KS in Yilan, Taiwan before the satellite signal had been received. KS was found and photographed foraging together with a flock of seven other Whimbrels in one of the river channels in Xiapu wetland along the north-east coast of Taiwan (Photo 3.). We do hope to meet KS along the Flyway again on its southward migration.

Another satellite transmitter was fitted on Whimbrel JX on March 25th, 2017 at Roebuck Bay, Broome (Photo 4.). JX departed Broome slightly later than KS and KU on April 20th, 2017. After a continuous four day flight of 3,049km, JX unexpectedly stopped migrating soon after it crossed the equator and stayed at Malanut Bay in Palawan, the Philippines.

Over the past 86 days, JX has mainly used an estuary and two off-shore reefs 5-10km from the coast.

We are now all waiting for the next move of our Whimbrels when southward migration kick start.

KU being fit with satellite transmitter at Roebuck Bay, Broome by David Chang. Used with permission © 2017.

Paddy field in Panjin, Liaoning Province which were used by KS and KU by David Li. Used with permission © 2017.

JX photographed in Roebuck Bay on 26 March 2017 by Jack Winterbottom. Used with permission © 2017.